The biggest international climate event of the year is always preceded by a pile-up of reports, timed to be released in the week or two before delegates arrive.

The U.N. Environment Programme’s annual Emissions Gap report justifiably steals the headlines, highlighting the growing chasm between where the latest climate science says temperatures need to remain by 2050 to keep planet Earth safe for humans, and how high temperatures could rise, even if all the promises made by governments and businesses were to be fulfilled.

The 2022 report, ahead of this year’s event in Sharm el-Sheik, is another sobering reality check piercing through the frothy net-zero rhetoric. It revealed that unless climate commitments are strengthened, the world is on track for a 2.8C rise in temperature by the end of the century, 0.1C higher than was estimated in the UNEP’s assessment last year.

The body’s executive director, Inger Andersen, seemed close to tears when she briefed journalists last week: “We need to cut emissions by 45% by 2030 to keep 1.5C alive …. But this scenario isn’t credible because the policies aren’t in place. The science in the UNEP report is resounding … We are sliding from climate crisis to climate disaster.”

The sense of deepening gloom is also seen in the normally gung-ho U.N. Race to Zero campaign, led this year by High-Level Climate Champions Mahmoud Mohieldin and Nigel Topping, which aims to mobilise non-state actors including businesses and investors to set ambitious climate commitments, thereby giving governments cover to be even more ambitious in their own targets.

It was a blow last week when news came that the Glasgow Financial Alliance for Net Zero (GFANZ), which was launched at COP26 last year in partnership with Race to Zero, is dropping its requirement for members to commit to Race to Zero’s standards, amid reports that many big banks were considering pulling out of the alliance, following the departure of two pension funds. 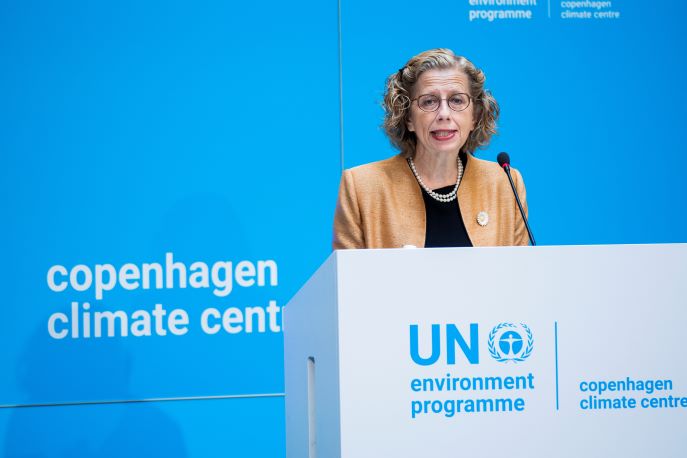 Inger Andersen, Director General of UNEP speaks at the opening of its Copenhagen Climate Centre in April. (Credit: Ritzau Scanpix/Martin Sylvest via Reuters)

A key sticking point for the coalition, who have combined assets under management of $153 trillion,  was Race to Zero’s requirement that signatories must "phase out development, financing and facilitation of new unabated fossil fuel assets, including coal".

GFANZ, led by former Bank of England governor Mark Carney, is now requiring that its members "take note of the advice and guidance of the UN Climate Change High Level Champions and the Race to Zero".

Other reports last week highlighted the biggest roadblock that is standing in the way of net-zero: the crying dearth of accurate, actionable data.

SAP, in its latest survey of 328 business leaders in the UK, found 90% linking their long-term profitability with environmental sustainability, a jump of 19% on last year. However, just 8% are satisfied with the quality of their data, and 40% rely solely upon assumptions, estimates and industry averages to screen the environmental impact of their supply chains.

Another study from Boston Consulting Group, of 1,600 large organisations globally, found that only 10% were able to fully quantify their carbon emissions across all three scopes, a tiny improvement on 9% last year. And despite supply chain emissions (Scope 3) accounting for some 80% of most companies’ carbon footprint, only 12% of respondents identify Scope 3 as a priority for emissions reduction.

In his testimony to a UK parliamentary committee inquiry into net-zero last week, Mark Carney said a new tool called the Net Zero Data Public Utility will be up and running by this time next year, which he said would make climate transition-related data publicly available in a single place for the first time. “This will show who is doing well (in achieving net-zero targets), and where there are holes … Once there’s confidence that we (GFANZ signatories) have it right, you could make an argument for regulation” for the entire financial sector, he told MPs.

In his ESG Watch column this month in Sustainable Business Review, Mike Scott looks at how meaningful progress on climate action in the finance sector is coming from an area that has been largely overlooked: insurers. He says growing numbers of insurers refuse to cover coal projects, particularly in reinsurance, where 62% of companies have coal exclusion policies. Some have recently announced exclusions of oil and gas, led by Munich Re and Lloyds Banking Group. 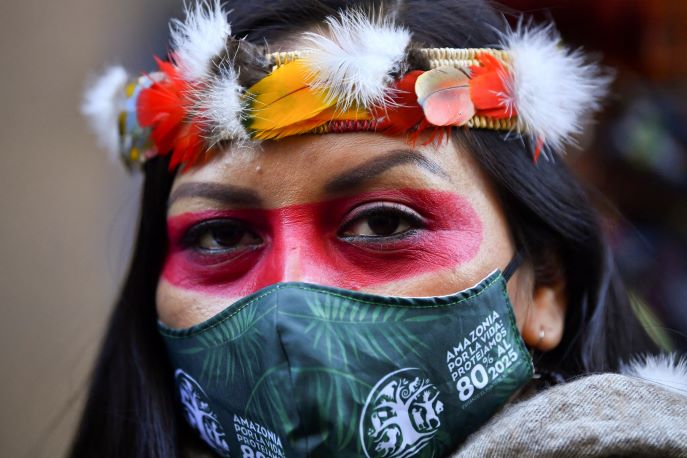 An indigenous woman takes part in a protest at COP26 in Glasgow in November. (Credit: Dylan Martinez/Reuters)

Angeli Mehta is more downbeat in her Policy Watch column, writing that the Egyptian COP presidency’s hopes that year’s climate summit will deliver badly needed adaptation funding for Africa are likely to be disappointed. This is in the wake of October’s G20 meetings and annual meetings of the World Bank and IMF, which ended without a clear roadmap for reforming the IMF and World Bank to address the multiple threats facing the continent.

Calls for a just transition at COP 27 will be heard from communities around the world, not just from African activists. Mark Hillsdon reports that indigenous peoples fear being marginalised again after being welcomed to the top table by negotiators at COP26 in Glasgow, where there was a pledge of $1.7bn to boost their role in protecting forests and biodiversity.

However they are received in Sharm el-Sheik, indigenous people will get a proper hearing in the COP15 biodiversity talks in Montreal in December, according to Elizabeth Mrema. Mrema is both executive secretary of the UN Convention on Biological Diversit, and co-chair of the Task Force on Nature-related Financial Reporting.

In an in-depth interview with me, she explains how she is striving to pull off a “Paris moment” for nature, with the support of companies in the Business for Nature Coalition.

Nestle, the world’s biggest packaged food company, is among 330 companies that have signed a letter urging negotiators to strengthen a key target of the draft agreement, making it mandatory for companies to report on their nature-related risks.

Our other interview this month is from Oliver Balch, who talks to Nestle’s ESG spokesman Rob Cameron about its roadmap for net-zero. In the interview, Cameron talks about how it is using its clout to help argue for a global plastics treaty, which is the focus of Balch’s latest Brand Watch.

There will be more in-depth coverage of COP27 and its outcomes in the coming weeks from our columnists. However, there won’t be a pdf version of Sustainable Business Review in December,  as we will be publishing this year’s last issue of The Ethical Corporation, on financing the energy and climate transition, on 8 December. It will be a busy November. 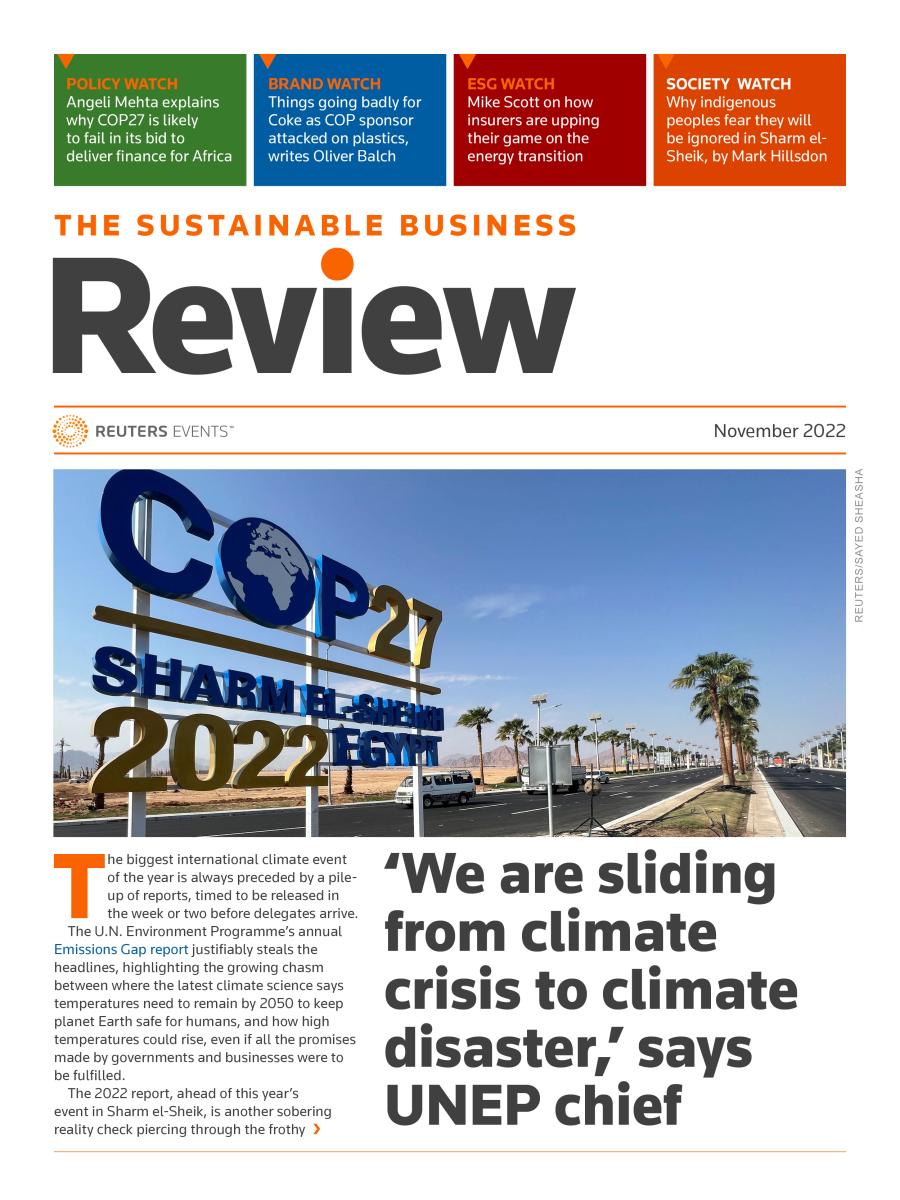 Can business bridge the yawning gap in finance for natu...
How deforestation risk continues to be blind spot for b...
Comment: To plug the green economy data gap we need reg...
Calls grow for companies to disclose nature impacts in ...
comments powered by Disqus

RT @SDDecleve: Looking at strikes across #Europe (remember the #UK is part of Europe 😉). We need to start taking tax reform seriou… https://t.co/C1WUDbuzi4